Home
Windows
How to Use AOMEI Backupper Network 1.0 – TechPcVipers (Updated 2019)

The latest version of AOMEI Backupper is 4.1, why AOMEI Backupper Network is 1.0 which is a centralized Windows backup software and a new product developed by AOMEI Technology company.

On the homepage, you see, right to Download network Free is Download Client Free button, which lets you download the free AOMEI Backupper Standard. Notice that the bigger size version of Backupper Standard is fully supported to install it on Windows 10, 8.1, 8, 7, Vista, XP and create WinPE &Linux bootable rescue media, while the smaller version only support to install on Windows 10, 8.1, 8, 7 and create WinPE bootable rescue media only. Please choose to download AOMEI Backupper Standard version according to your requirements.

If you select the second one – remote client installation and click Next, will pop-up a new window, AOMEI Backupper Network will detect all available computers within LAN. This is AOMEI Backupper Network’s automatic scan function, scan, and list. To control them, just input login information (domain account supported) or send a request. At last, install, update or even uninstall AOMEI Backupper client programs later on them. If computers are not listed, you could also add them manually by entering IP address or NetBIOS name. This is another function of AOMEI Backupper – Add Offline Computers: Add those offline controlled computers into the task and they will be automatically executed the backup task once they’re online. 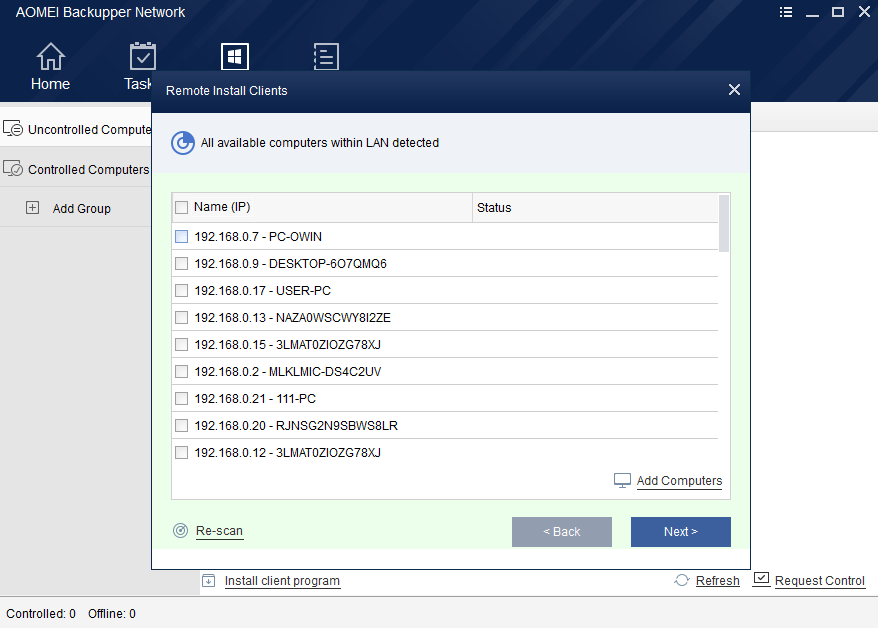 Except these, this Backupper Network has its own key features. Such as Flexible Backup Rules: when going to backup partition and disk, it allows you to specify which will be backed up by creating a template based on one of the client computers or choosing specified disks, disk number, partition number, drive letters or partition labels to match.

Logs Report: please see the following screenshot, there is a Logs window, you can switch to there via clicking the top forth button. Also, you can generate log reports with one click. By the way, the log reports are in HTML format. 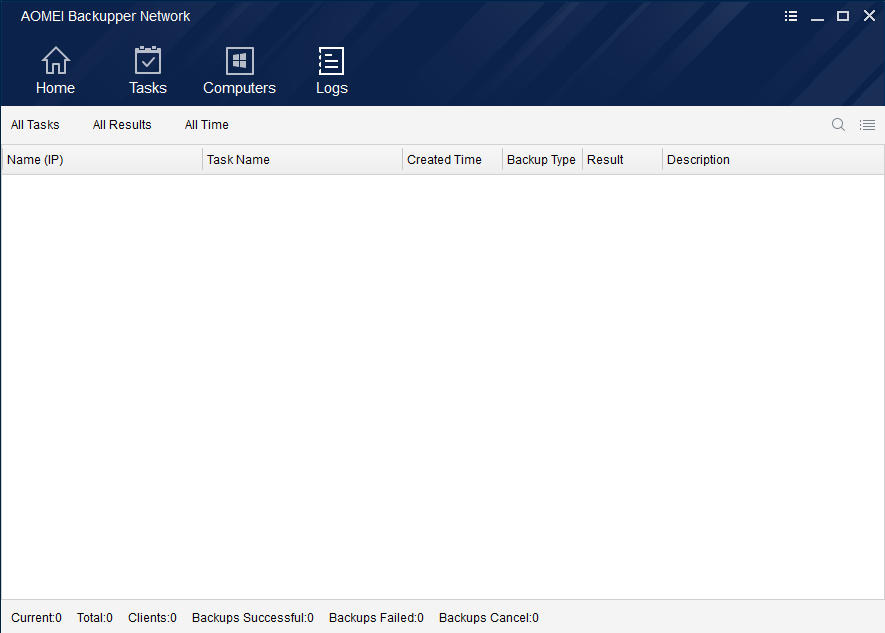 Installation Package with Authorization Code: Create an installation package with the authorization code. Once the client computers have installed the package, the central computer will be automatically authorized with control permission.

AOMEI Backupper Network 1.0 is a free tool, everyone can enjoy it without charge. It can make and manage backup missions on desktop PCs, laptops and virtual machines(if they are VMware, VirtualBox, Hyper-V, etc, you should install AOMEI Backupper Standard in the virtual machines.) within the same LAN from a single central management computer.

Now you see, AOMEI Backupper Network is strong and easy to use. We think it is very useful for admins to protect and manage machines in the lab. The current 1.0 version has many places to be improved and expanded. such as multiple languages support, sync and clone functions, etc.

If you have any suggestions, please leave a comment on the following box or discuss in AOMEI forum. 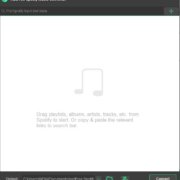 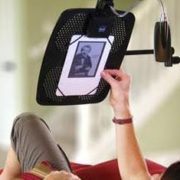